On why I sew my own clothes

And it's not just because shit fits better when I sew it myself. 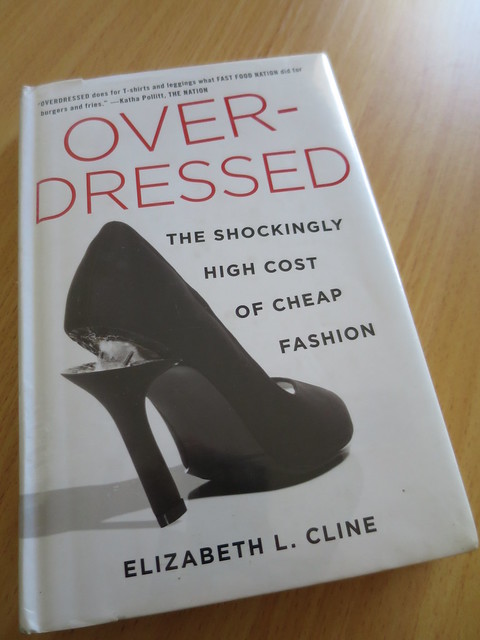 This month I've been reading "Overdressed" by Elizabeth Kline. It's a book about fast fashion - a term I will admit I'd not heard before reading this book - and cheap clothes, quality (or lack thereof) and what the actual costs are - to humanity, the environment and the economy.  Most of the time I'm uttering "uh huh" and "totally agree" and "Amen!". And I haven't even gotten to the chapter on home sewing yet. 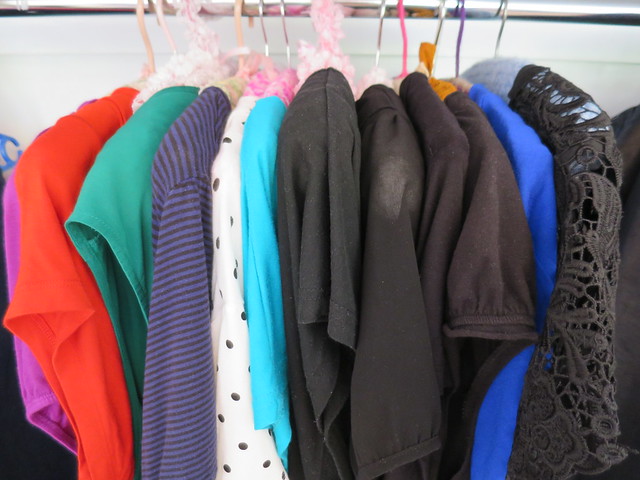 I thought I should start examining my own practices when it came to shopping and "fast fashion". In the interests of true disclosure, here is a photo of the shop bought tops in my wardrobe. These are the summer tops - in the hope of summer appearing soon, I've already packed away my winter wardrobe. I have other more casual tops in my dresser - a good mix of home sewn and shop bought. You'll note in the photo above that there are nine t-shirts. Sure they are dressy kind of t-shirts and I actually only wear 5 of them on a regular basis, but they are still t-shirts, and as of this year I can now make my own. Even dressy ones for work. Also four of the shirts are exactly the same. Bloody David Jones was having a sale last summer and I was desperate for something to wear. They were cheap-ish - about $29 each I think which for DJs is totally bargain basement.

Also you'll notice that I have five black tops - I wear a lot of black tops. Two of the tops will have to chucked out soon - they are getting to the point of way too much fading and pilling for me to be happy to wear them to work.

Also only two tops are made from natural fibres - silk and cotton. The rest are made from man-made natural products, such as rayon and viscose, except the black sheer one which is pure polyester. 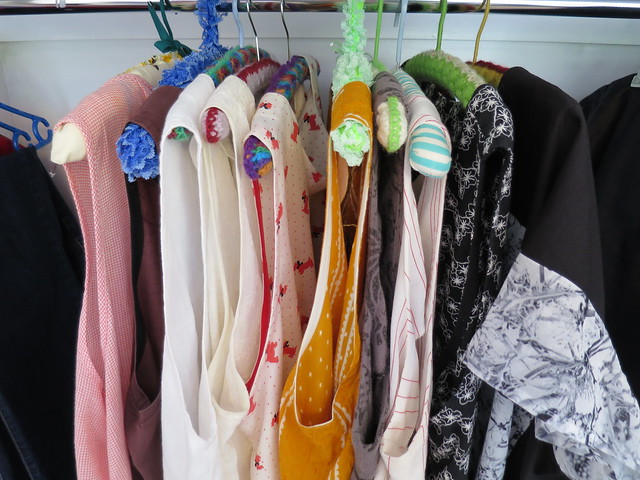 This is the home sewn top section of my summer wardrobe. All are sleeveless except for one (and that one was made last weekend. I have another made last weekend with sleeves - it's in the wash as I write this). The one on the far left is actually just re-fashioned - so I didn't make it, but spent a couple of hours cutting it up into something I could wear. There are six (count them) Simplicity 2938 Not Sorbetto tops. I really like that pattern. But here's the thing - this is the section of the wardrobe that gets worn more often than my store bought tops. The brown and cream tops get worn each week at work, and the sleeved one is about to go on constant rotation (I need to blog it - it's fantastic!).  Except for the scotty dog top, all are natural fibres (silk, cotton or linen) which is mandatory in my sewing - I don't wear synthetic fibres well, and I prefer the feel of natural fibres. I come from North Queensland - where you'd be called a fool if you wore synthetic fibres on a hot day.

Most of these tops probably cost me more than $29 (the cost of my DJs t-shirts) to make when you factor in the fabric, thread and interfacing -  but they are more stylish, get worn more, and have lasted a heck of a lot longer as well. For instance that grey top next to the yellow one was made almost four years ago. It gets worn constantly, and still isn't showing any wear. I'll have it for another 4 years at least. 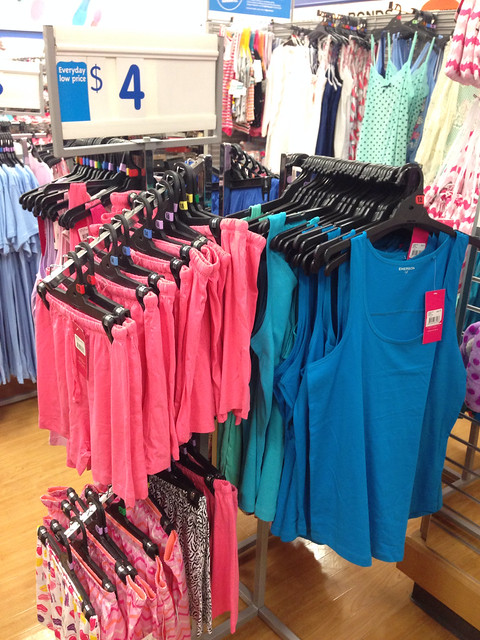 I was in Big W the other day buying new knickers (because the ones I bought only a year ago had shredded beyond wearability and I think I was scaring the other ladies in the swimming pool change room) when I came across this stand of "nightwear essentials".

So that $4 you are paying for your PJ bottoms and singlet top - what compromises are being made for that to happen? I can't even buy a metre of knit fabric for $4, let alone the notions that go along with making it into a singlet or pair of shorts. And how much was the poor worker that made it paid? The fabric dyer? The factory owner? The transport worker? What kind of horrendous working conditions must these people be working under to produce a garment which costs only $4? Especially when you consider that standard mark up is wholesale x 2 + 20%.

It blows my mind. I don't know how to fix the world problem of poverty in third world nations that allows them to be paid cents for making a garment is often-dangerous conditions. Then add the issue of textile workers who are getting paid a fair wage being laid off in Australia and the US (where the book is based) and other first world nations, and entire factories closing down because "overseas is cheaper".

So let's get back to that first question I asked on why I sew. I sew because I like knowing that what I am wearing has real quality and will last a long time. I sew because I can select ethically grown and dyed fabric if I choose to. I sew because I can determine that the fabric is natural fibre and isn't going to make me sweat and itch and smell. I sew because I don't like wearing exactly the same $4 shirt as some other schmuck in the lift at work.

I sew because I am better able to stamp my style aesthetic on what I sew, than what I buy.

And yes, I sew because it fits better.

My aim by the end of summer is to have all those fancy work t-shirts replaced by home sewn shirts that I will actually wear.  And maybe the shorts I have in my dresser if I can find a good pattern. I only have one store bought skirt in my wardrobe and no dresses - everything else is home-sewn, so this new challenge should be a doddle. For the tops, that is. (Shorts and trousers kind of don't go with sway backs and wide hips.)

I'll be making myself more aware of the fabric I use and buy - although I think this is generally difficult with fabrics that don't have a printed selvage. But I shall try.

I will shortly be sewing my own knickers if these new ones from Big W don't last (they'd better last - they cost me a bomb).

I know a lot of what I have written here might not make sense or even seem contradictory. It's so hard to think of spurning the clothing industry and potentially putting people already earning little money in third world countries out of a job. But I can help in other ways, and being better informed and raising awareness goes a little way towards that goal.  Go and read "Overdressed". And maybe watch some investigative news shows like this one.

And go and sew some of your own clothes.
Posted by Michelle at 12:36 PM