This is not the quilt that Michelle made. 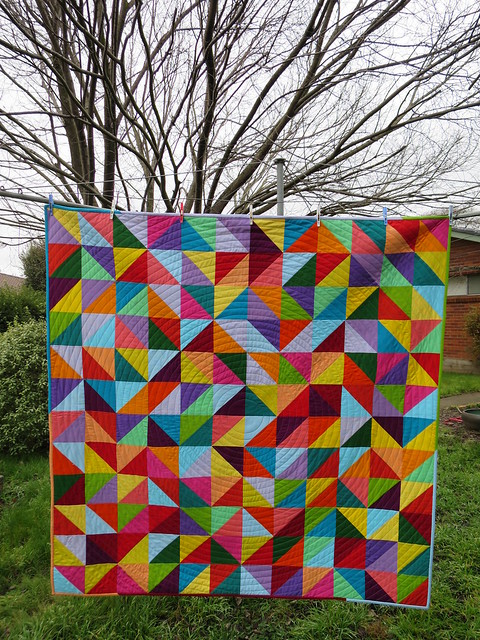 This is the quilt that Jan K, Jan M, Tracy H, Tracey B, Ronnie, Margaret, Pam, Merrie, Gerda, Emma, Valetta, Kay, Tina and Michelle made. We are fourteen members of the modern quilting group of Canberra Quilters and we decided to make a quilt to enter into the Canberra Quilters Members Exhibition which was held earlier this month. 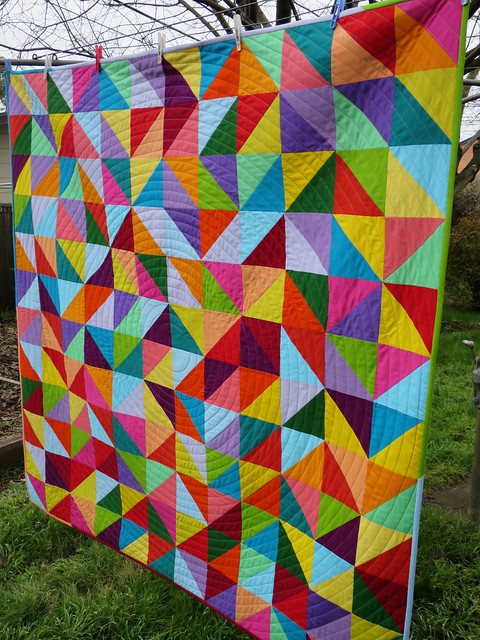 And guess what? We won third place in the Group Quilt (Open) category! 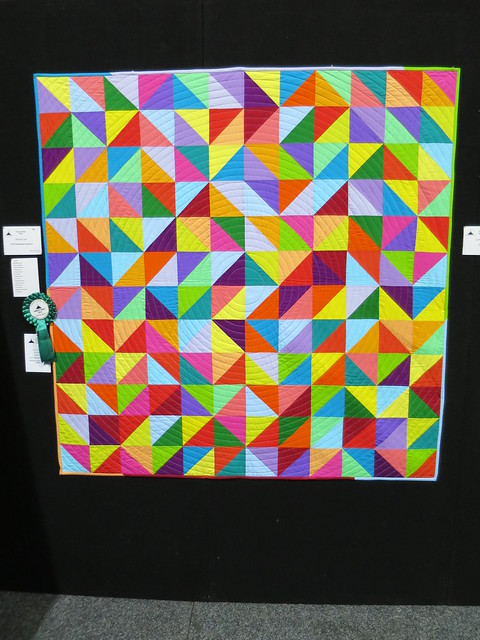 So back to the quilt. I suggested at our first meeting this year that we could make a group quilt for the exhibition. We'd made a group quilt before, as an emergency hug for our group's founder when she was unwell, and not only did we produce a fantastic quilt but we worked extremely well together.

We decided to go with the same idea again for this quilt - HSTs are a good option when there are so many of you making the quilt, and it also allowed us to play on the design wall and that's usually the best part. Jenny had sent me a photo for colour and fabric inspiration and so based on that I purchased 22 different colours for the quilt.  There were a lot of pastels in there, much to most of the group's initial dismay, but those pastels worked really well to brighten up the darker maroons, greens, reds and purples. 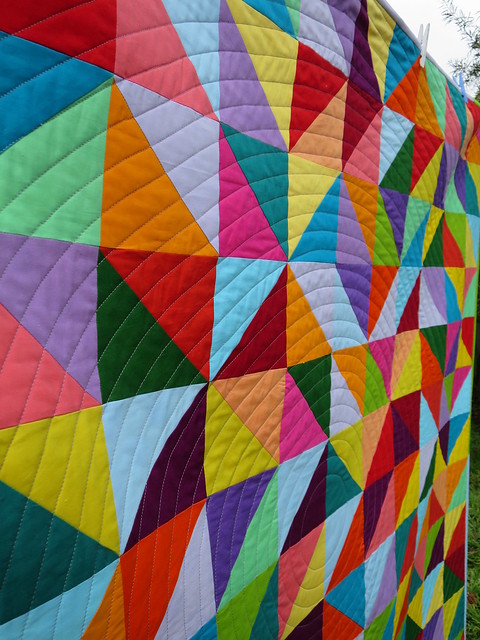 It was entirely my fault that I didn't get the chance to book in available dates at the Canberra Quilters rooms until May, so in the end only 14 people could join in, and not the 20-odd that had expressed interest. It was all OK in the end though, but I know a lot of people were disappointed they couldn't be there to help make it. (Next year I'm hoping it won't be a nightmare year of household health issues that this year has been and I'll be able to be more organised.) 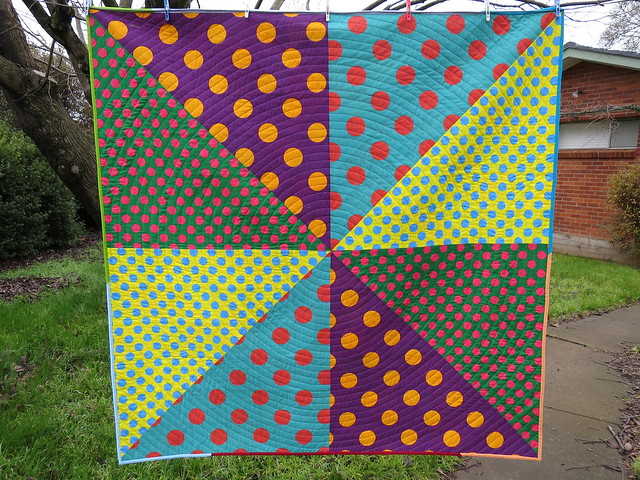 A couple of the ladies (Gerda and Emma I'm looking at you, you crazy chicks) got creative with the backing. Yes that is a pieced pinwheel back. Yes, that centre point lines up perfectly thanks to Tracy H. And yes, we tried really hard to centre the backing under the centre of the quilt when we basted it and got extremely close!

The quilt top was done in a few hours on a Saturday. The backing was sewn, and binding made, and we had about 6 sewing machines on the go while others cut, matched and trimmed with a couple of BlocLoc rulers that we had brought along with us (I cannot emphasise how wonderful the BlocLoc rulers are - and no they don't pay me to say that!). 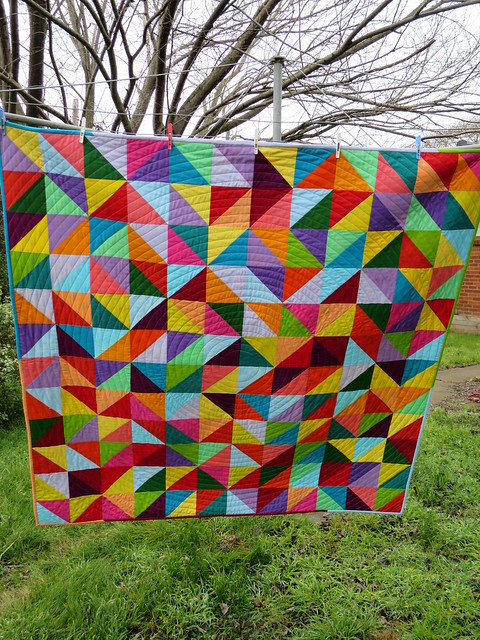 We had a lunch break when most of the blocks were sewn - from the far end of the room we kept assessing the placement and then finally one of the ladies got up and starting rearranging at our bidding. 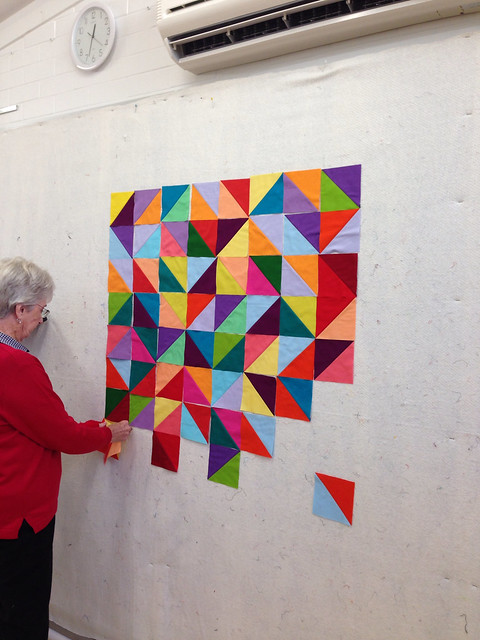 We named the quilt "The Problematic Apricot" because even though we had heaps of people sewing the apricot blocks, a lot of those blocks had to be unpicked as they were just causing too many problems when sewing the strips together. We don't know why - there was no obvious stretch, the fabric wasn't slubby or open weave, and in fact I think the apricot was the most expensive of the fabrics I'd purchased. Jan K and Tracy H did most of the unpicking, saying "This apricot fabric is proving problematic" and the name stuck. 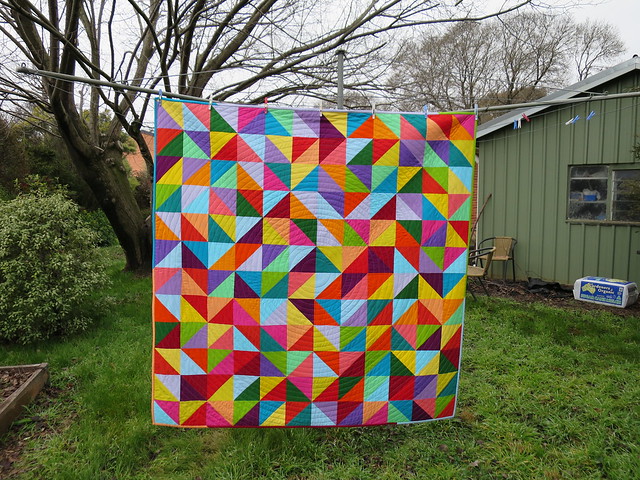 (Here you get to see the full horror of my backyard, a victim of two wounded gardening soldiers - poor yard! These photos were taken over a month ago - it's much worse now!)

We spent an hour one evening a week later basting the quilt, and then I took it home to quilt it. I decided to use my favourite Aurifil 28/2 weight thread in my favourite grey colour 2605. I really do believe the heavier 28 weight adds great definition to the quilt, especially when using thinner cotton batting. Unfortunately half way through quilting it with concentric circles I seriously injured my back (not from the quilting though.). Luckily I could still sit at a sewing machine for periods of 10 minutes and the circular quilting gets much easier (with less wrangling) the further out you go, so the rest of the quilt was done in no time. But I must admit I'm not happy with the quality of the quilting at all and I feel it's the one thing that has let down the quilt. From the back of a galloping horse though, it looks great!

I attached the binding and then handed it over to Tina to stitch down by hand with only 4 days to go until the quilt was due to be handed in. She did the best binding job I have seen in my life. Labels and sleeves were attached the evening before the handover, and we had ourselves an entry! 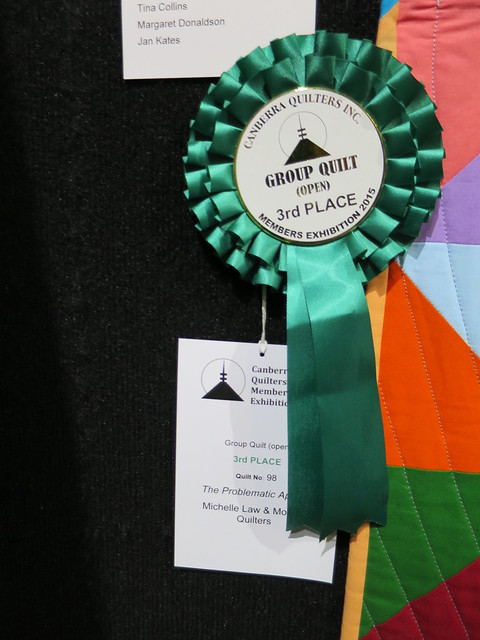 I'm the very last person you'll find getting competitive in a quilt exhibition, but I was so proud when I got the phone call to say that we had been awarded third place in our category. It was such a great group effort, and we can't wait to do it all again next year.

Before you read anything more about this quilt, you need to go and read this post. Go on. I'll make a cuppa while I wait for you to come back. 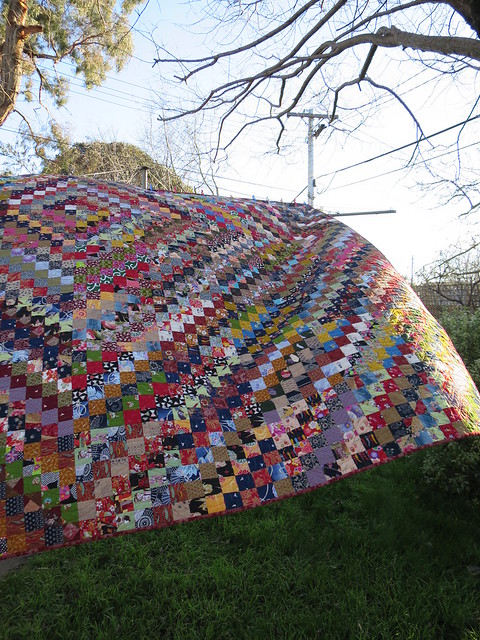 Read it? You sure? Great. You are now permitted to read on. 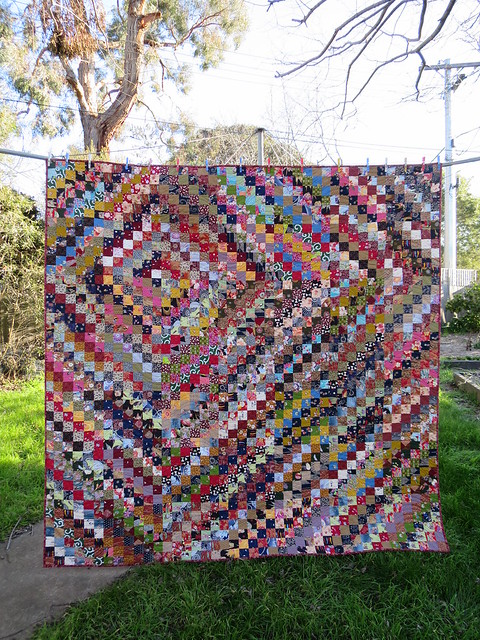 I finally finished my Japanese trip around the world quilt.  I called it "Trip around Honshu" because that's what I did last November during some of the happiest few weeks of my life. I tripped.  Around Honshu in Japan.  So cool. 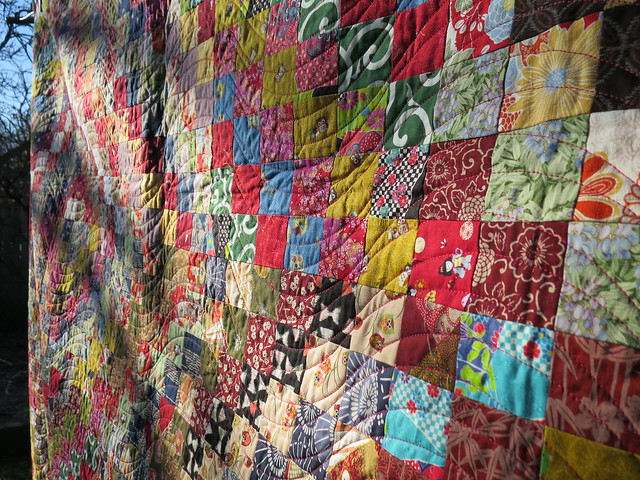 I finished the quilt top in about August or September last year, around the time that my quiltjo went walkabout. I really didn't like this quilt at all. I'd just come off making a bright rainbow of a quilt, all my other UFOs were bright and loud and sassy, and then there was this beast just sulking in the corner, neither of really caring whether I got it quilted or not. 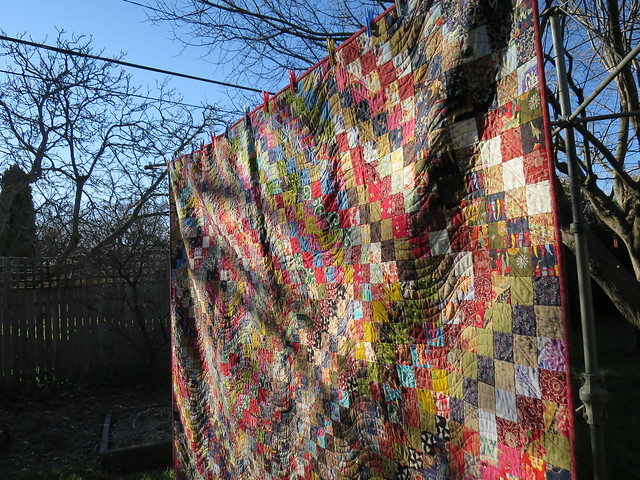 I take a lot of pride in quilting most of my quilts myself (because then they really feel like they are mine, and not a team effort), but the true beasts I tend to send out to a professional because I worked out long ago that professional quilting is cheaper that physiotherapy. I hadn't used the long-arm skills of my friend Gemma from Pretty Bobbins before, except for an emergency hug quilt our modern group had made that she kindly (and very beautifully) quilted, so I thought now was the time to get her help in working out what the heck to do with this monster. I was keen on something geometric but really couldn't decide, and then at the last minute she showed me a wavy edge-to-edge pattern and I was sold. It really is the perfect pattern for this quilt. The thread is King Tut, from memory. It's kind of a variegated dark pink to red colour and it's perfect for this quilt. 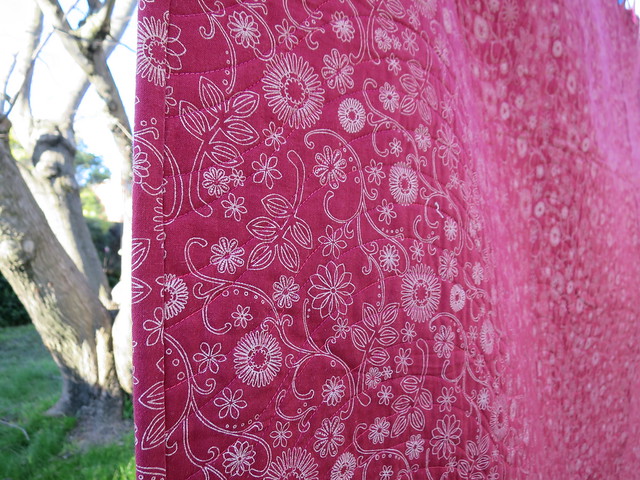 As I've already mentioned, I'd stopped caring about the quilt and just wanted it DONE, so rather than piece a back like I usually do, I bought a wideback fabric online and had it sent to Gemma's studio. It was perfect.

I got the quilt back home just before we left for Japan, but I took aged to trim it, then bind it. In the end I finished the hand binding in only 5 hours on the couch (with breaks). That's 8.5 metres of binding. Is that a world record or something? Totally should be. 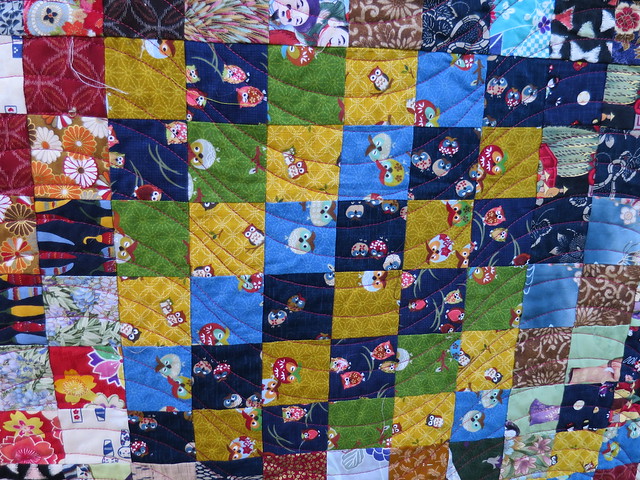 I have a lot of favourite blocks. A couple of them have the fabric that my beautiful niece had in her wedding invitations - they remind me of her and her wedding day. I also have blocks that have scraps from skirts I'd made. And lots of blocks with fabrics I remember the exact shop in California that I bought them from. But my favourite block is the one made entirely of owls. I bought all the fabrics from Shuji and there are owl squares throughout the quilt, but I figured I had to have at least one entire owl block in there, right? 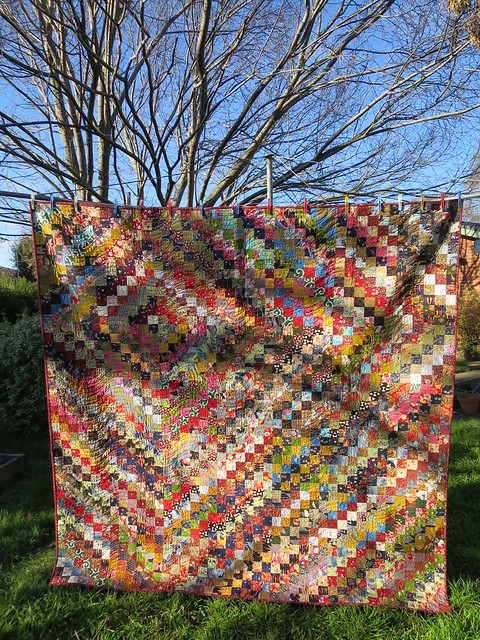 So there's my quilt, my Japanese scrappy trip around the world. I showed it to Shuji last weekend at the SCQuilters retreat and he loved it and could identify all his fabrics. People at the Canberra Quilters meeting last night loved it as well. From a distance it has a tendency to sparkle with the lighter creamy fabrics, which is what I think people love about it. It's definitely one of those quilts that is full of memories for me. and I am growing to love it, even though it's not really my style any more. But that's totally OK with me. It might even get a turn on the bed this summer.