Simplicity 1920 - a (much) repeated pattern for the win

A couple of years ago I muslined up a top from the Simplicity 1920 pattern. It was a disaster, mainly because of the w-i-d-e neckline that left me a wee bit frustrated when it came to making the top sit nicely on my shoulders. Without showing bra strap. Yeah, that.

However towards the end of last year I had a wedding to go to and little time to make a nice top, so I reached for Simplicity 1920 as it was the shape of top I was after. I added about an inch to the neckline, ignored the shoulder/sleeve vents, and made it in red silk. 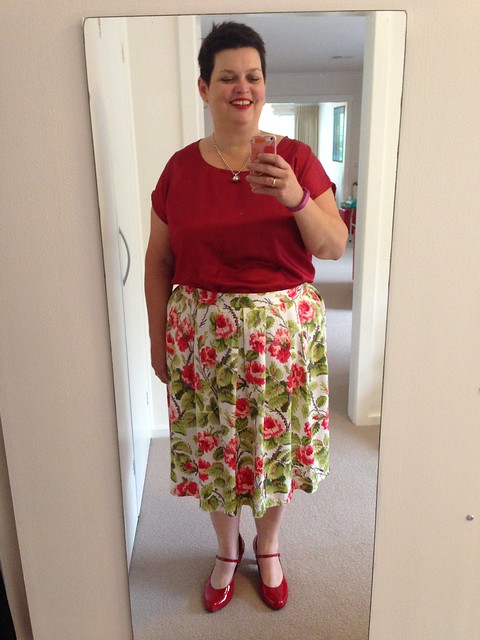 It was lovely. I still wear it each week, but making it without the sleeve vents was a massive mistake. I have narrow shoulders and, thanks to swimming every day, guns. I needed that space in my sleeve to allow movement (and gun-flexing).

I wanted to make it again, in linen this time for my long summer staycation.  So I made three. 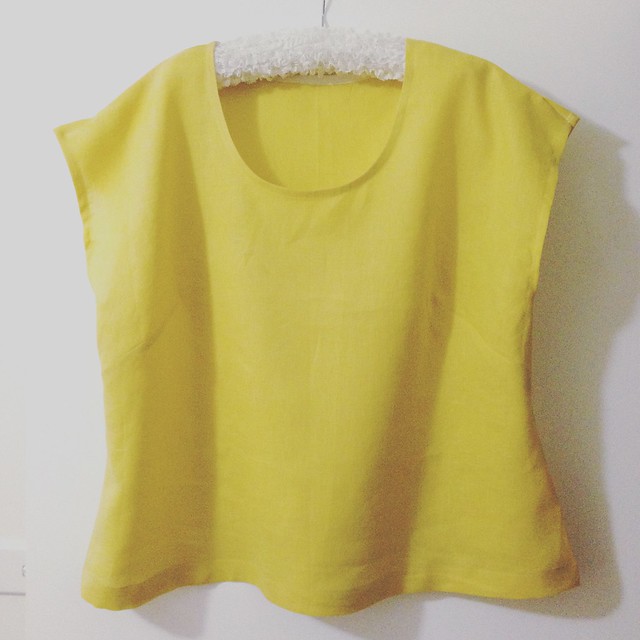 I made this one first out of a yellow hanky linen I'd purchased from Addicted to Fabric a couple of years ago. Its my favourite. 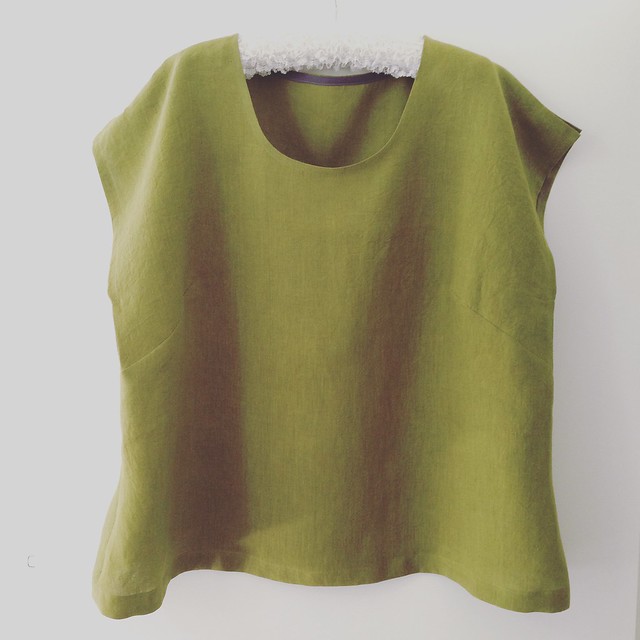 Siobhan and I went to Addicted the day before New Years Eve - her to get buttons and my opinion, and me to pick up a white linen and another nice plain colour that would go with most of my summer skirts.   This olive green is such a gorgeous colour. I made this top on New Year's Eve and wore it out to the movies that night. It gets worn constantly. 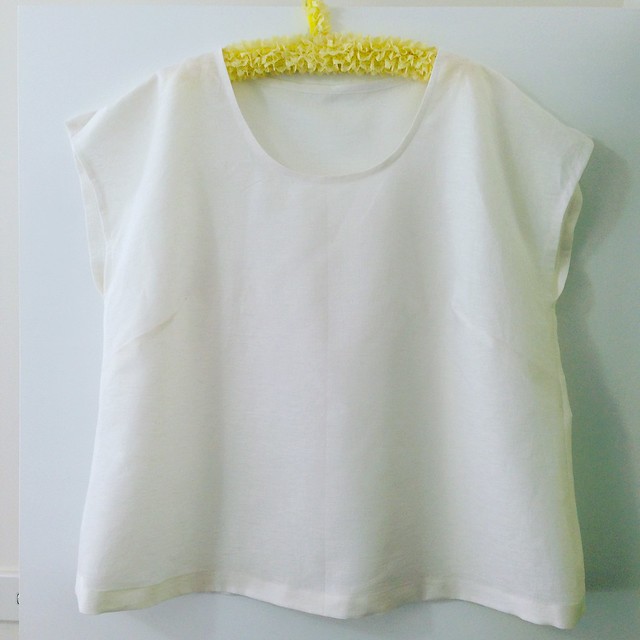 I'm not much of a white fabric fan, but heck - it goes with everything.

In the last week of my staycation I dedicated my sewing to work clothes. So I cracked open the Liberty stash. I'd never sewn with Liberty in my life. I was justifiably nervous. 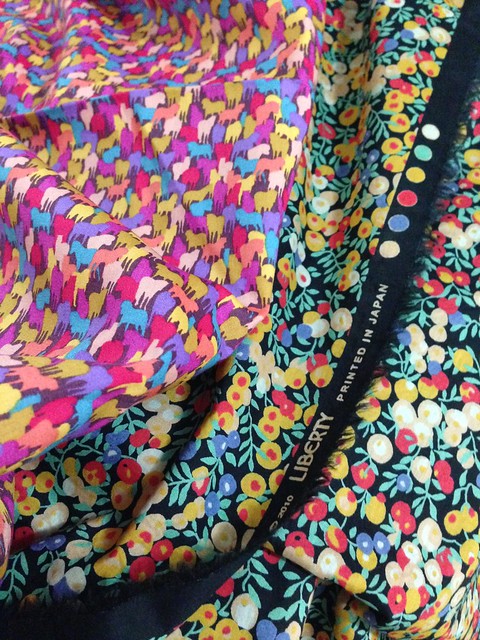 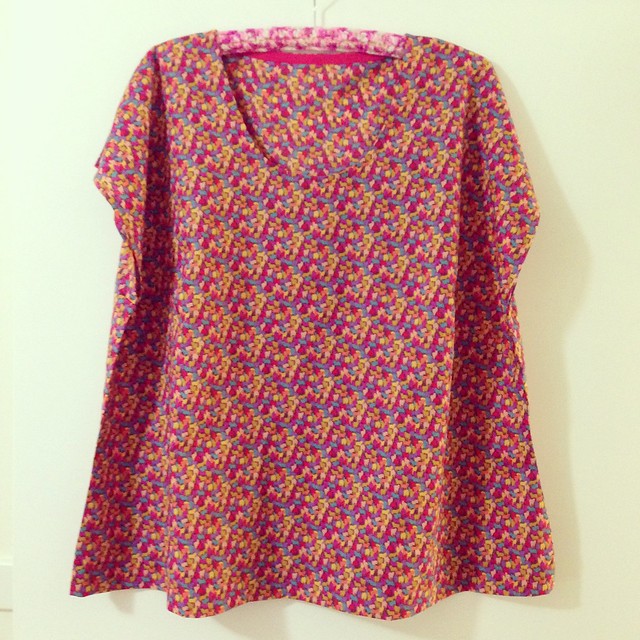 This is the "Kussman" print with Icelandic horses. I bought the fabric at Addicted ages ago. I really, really love this top. I've already worn it to work with a black-grey textured skirt and it's not often I get compliments on what I sew but there were compliments. Lots of them. 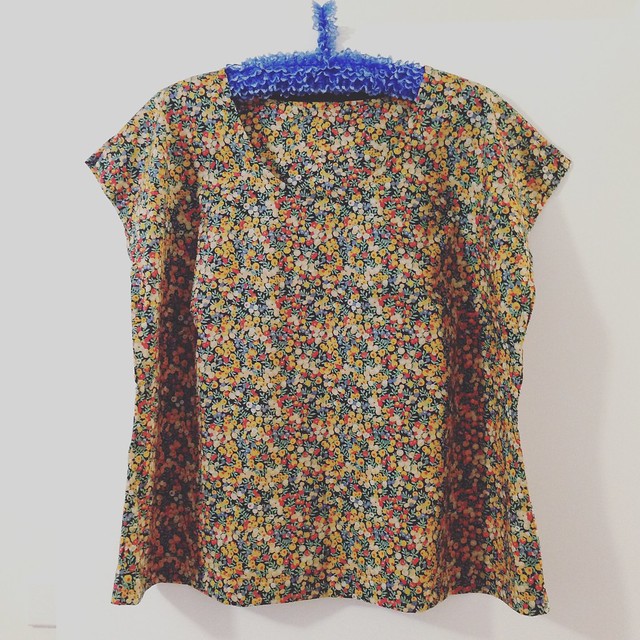 And this is Liberty's "Wiltshire Berry" fabric. I bought it at Shinjuku's Okadaya in Tokyo. I always thought it would be perfect with a black skirt, so I made a black skirt too. The fabric is unbelievably pretty.

I'm not sick of this pattern yet at all. I've cut out another two tops for work in the last week, and I made up one during Canberra Sewing Crew social sewing yesterday. I almost finished another, but I made a massive mistake in overlocking the neckline because it was fraying badly, and then slicing into the neck with my overlocker blade. Such a rookie mistake - I was embarassed. So it's sitting in the naughty corner for now until I can work out how to fix it. 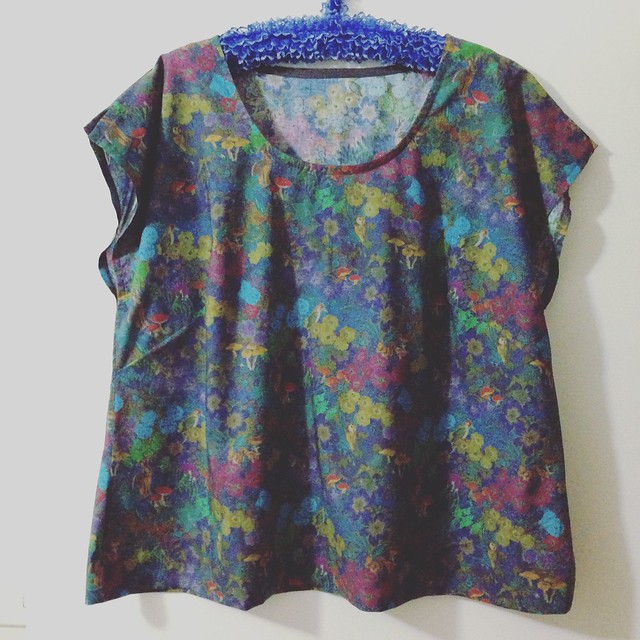 Here's the version I made yesterday. I used a beautiful printed lawn from Tomato in Tokyo. It has toadstools and squirrels and owls and bunnies on it. I will never be too old to wear fabric with those things on them.

Since my red silk version, I've added between 1 and 1 1/2 inches to the neckline, both front and back. It seems to work for me. Weirdly the bust darts are in the right place for me, when normally they are too high. I actually have never followed the pattern instructions for this, so I don't know whether I'm supposed to make the bias for the neckline, or even if there is a bias. But I just use store bought bias binding. It works for me, and for this top. 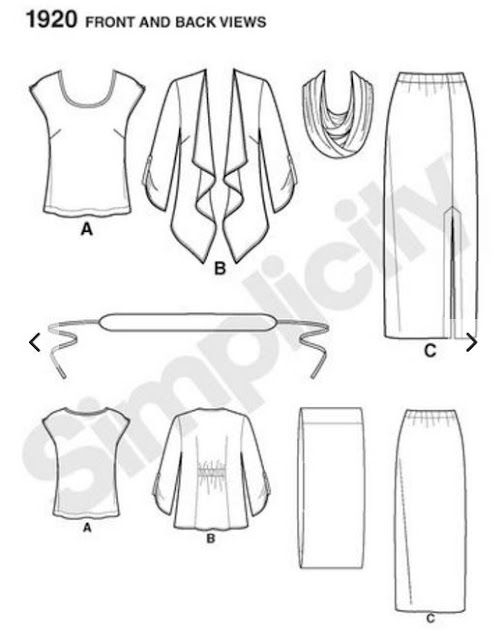 I've added the line drawing for the pattern here to demonstrate the wide and low neckline. I'd also really like to make that jacket, but without all the shirring on the sleeve and back.

All up, it's a simple but really nice top, and very comfortable to wear. I take my time with making it - doing all the top stitching of the vents and arm holes, and it probably takes less than two hours, including cutting. It's a good, versatile pattern, and definitely a key article when it comes to building a basic wardrobe.

In undertaking the great sort-out of Spring-Summer 2015/16, I've discovered a few unblogged quilts , so I thought I might start a series called The Unblogged. Knowing me, I'll still be blogging the unblogged until 2017, but to show you how dedicated I am, here's the first Unblogged. 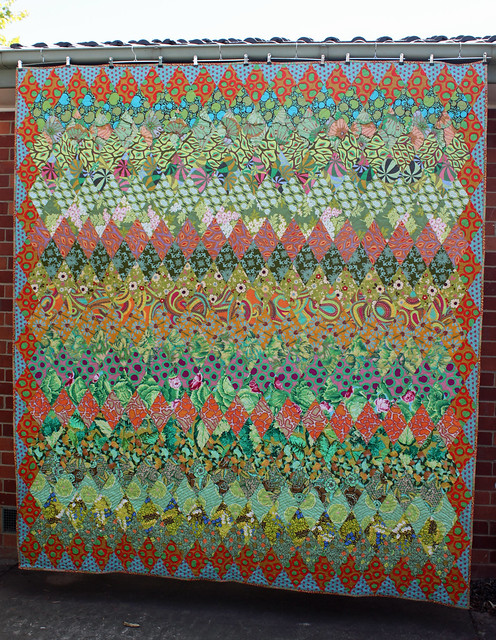 It's a monster and it was too big for the clothes line and too heavy for anyone to lift so I cleaned out my closet of skirt hangers and got the ladder out to hang the quilt on the tallest gutters of my house. Oh, and it's 36 degrees celcius outside and SCORCHING. You're welcome.

I started this quilt at a Kaffe Fassett and Brandon Mably workshop almost 5 years ago.  Good Lord. I finished it last summer, I think. I only say that because I really can't remember, but I do remember suffocating under this huge quilt last summer, so perhaps. 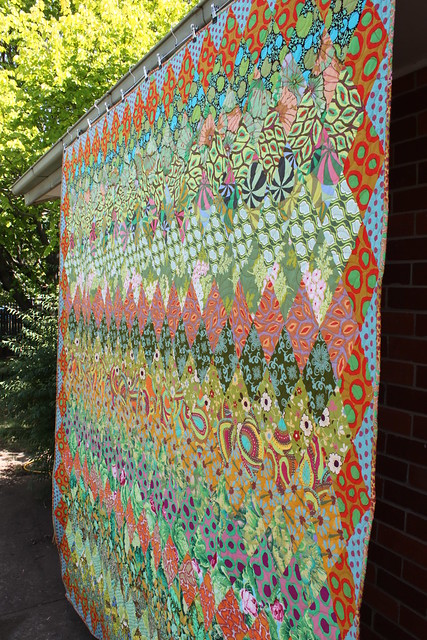 I didn't have much of a clue when I was putting this together. I followed the pattern for Cool Diamonds (from the book "Kaleidoscope of Quilts") to a tee, which meant the quilt size was much bigger than was practical. We have a low queen sized bed, and this quilt is really more a king sized or bedspread size. It's so long it hangs to the floor, and I can tuck my pillows underneath it. Not the most practical size, and also very heavy. So this quilt doesn't get used too often, but it really is very pretty to look at. 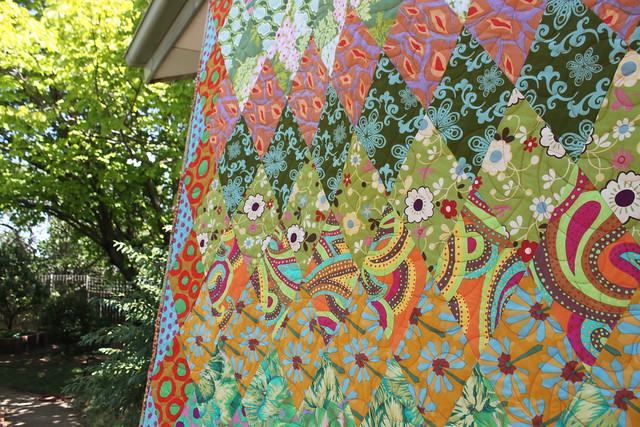 Raylee from Sunflower Quilting quilted it in an orange Rasant Thread and I really like it. I didn't want the quilting to blend in, and I wanted it to acknowledge the amount of orange that had crept into the quilt. 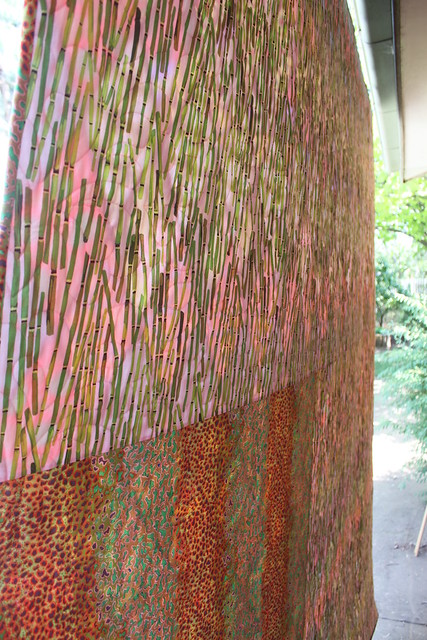 I backed it with Martha Negley bamboo print and some spare Kaffe from the binding fabric. 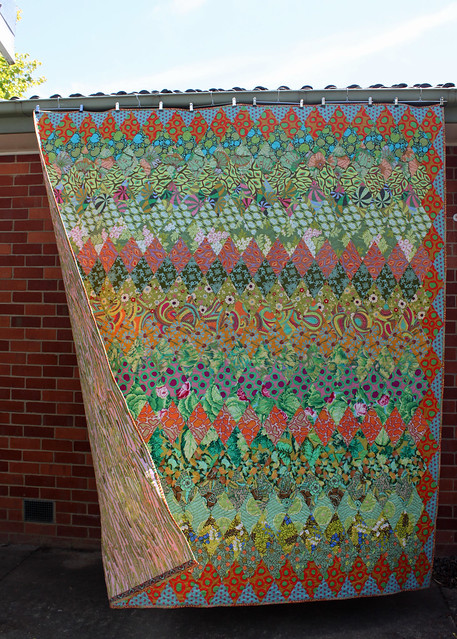 I called it Hot Flush Diamonds because in the book there is a Cool Diamonds pattern, and a Hot Diamonds pattern. I'm pretty sure they are identical except for the colours used. I started out with a cool green quilt but it was bland, so we added orange and suddenly it wasn't such a cool quilt anymore. There were definite temperature spikes in there. Hot Flush. Enough said.

We need to talk about Chester

Sharon from Two Bits Patches, the creator of the Chester Criswell Block of the Month that I started three years ago, has decided to start sending emails once a week to reinvigorate those of us (*cough* like me *cough*) who had fallen by the wayside. It was the gentle kick up the butt I needed. I mean, there's only so much needle turn appliqué a lady can do before she goes stark raving mad! No wonder I'm so slow (I'm intensely insane already).

Chester Criswell is a very traditional signature album quilt - originally made in turkey red and green back in 1852 in Pennsylvania. I'm a traditional kind of quilter, but I'm not one for the traditional colour palettes so I've been doing mine in bright modern fabrics, on a text (or course) low-ish value background.

I've had the nine blocks I thought I'd made so far up on the design wall the last few weeks (and then today I found a tenth!! Oh Reuben Stubbs - you always were trouble) so I thought I'd finally document them and put them up here on the blog for posterity and fact checking (this is how I found the tenth block, actually. He was on the blog a few weeks ago. I knew Reuben wasn't a figment of my imagination!) 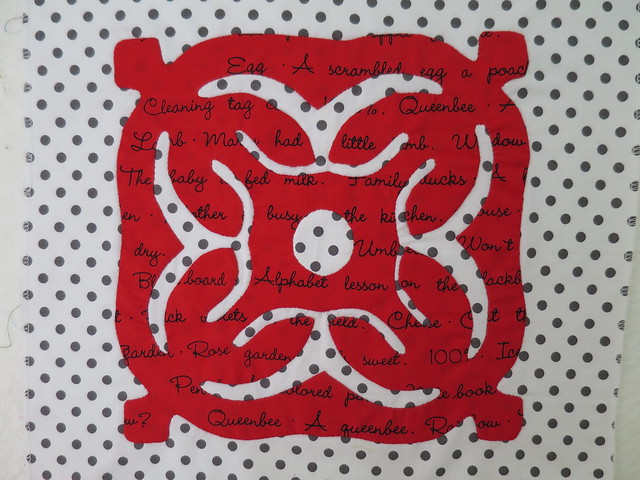 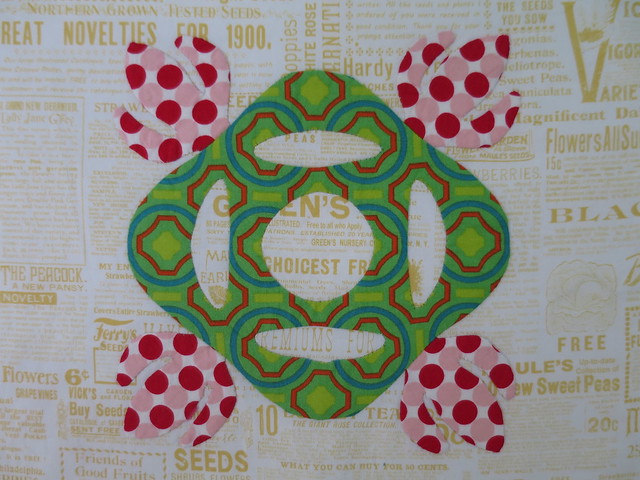 2. Elizabeth Cowan (done using a different technique with "wash out" stabiliser. I hated the technique, and it didn't wash out at all. I would love to do this one again one day.) 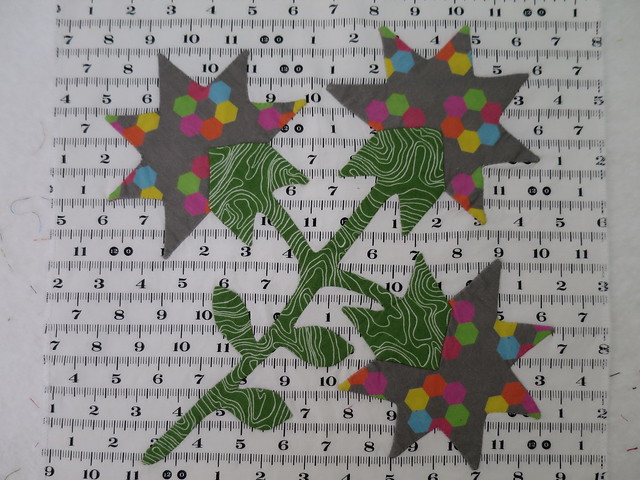 3. Priscilla and Joseph Turner (again, done with the dodgy technique described above before I realised the evil stuff wouldn't wash out (and hence why the grey fabric has gone crinkly)). 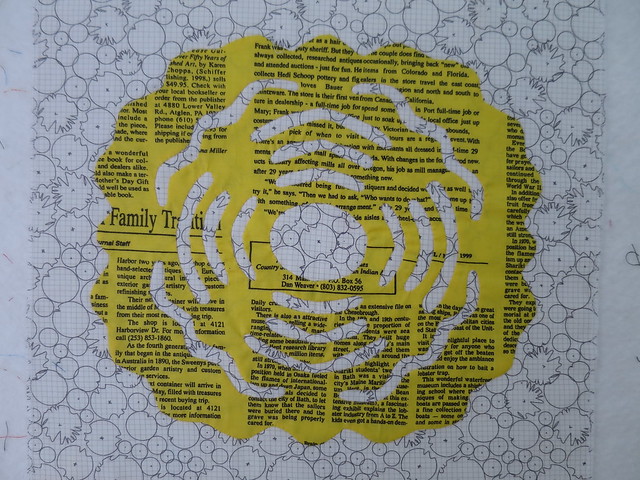 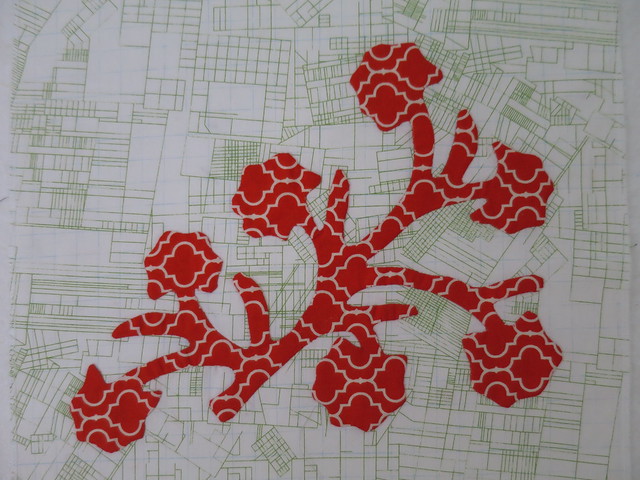 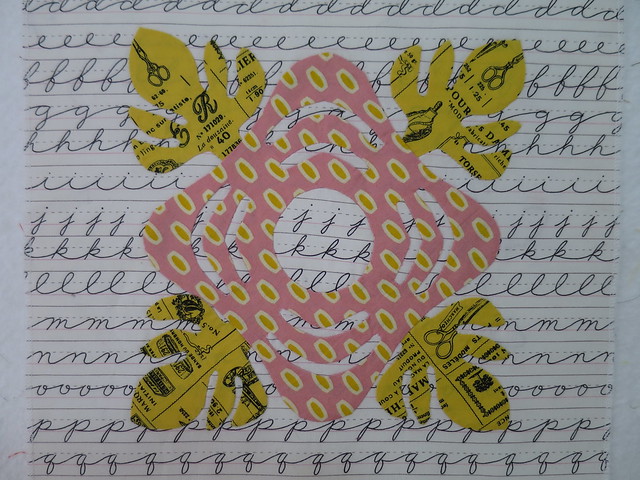 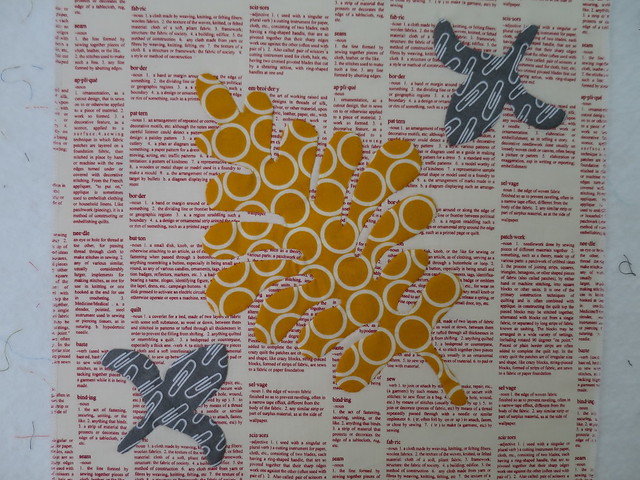 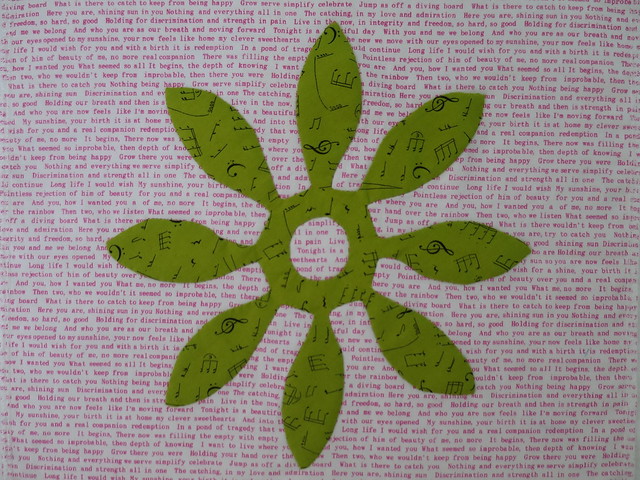 21. Mary Trayner (this is when I took the blocks back up after more than a year's break and decided to start working backwards. Didn't last long.) 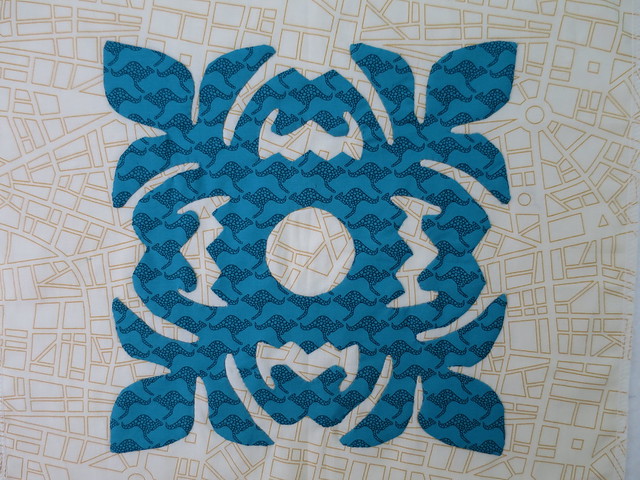 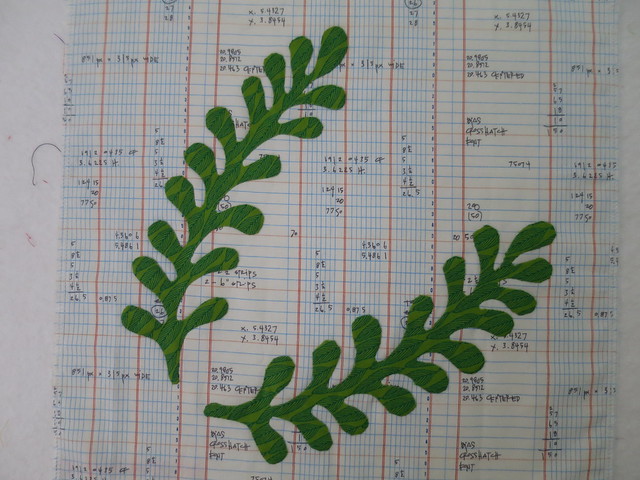 It's a wet and cool day in Canberra today so I've spent this morning at the pool (naturally) and this afternoon avoiding the mess in the kitchen and prepping block 10 Rachel Dickie. Once I deal with the mess in the kitchen, it'll be leftovers for dinner, a nice gin and tonic, The Flash on DVD and Rachel and me. 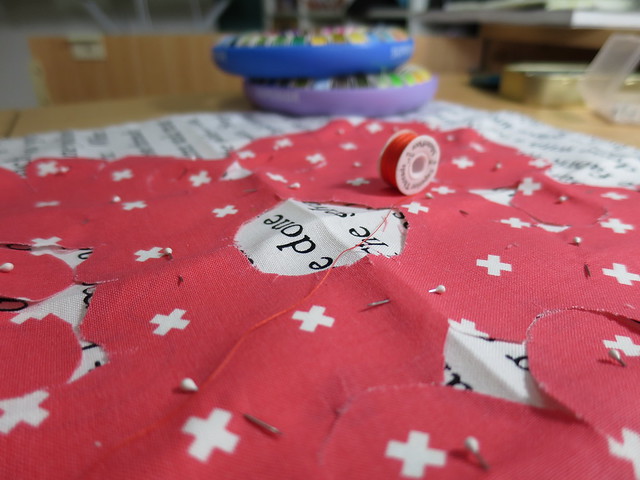 Anyone interested in a tutorial on how I prepare my freezer paper appliqué? Or are you all down with that already?