Lucy Boston went to the circus, and then she went to Sydney

For four years now I have entered the Sydney Quilt Show, and it's always a blast. I have made the BEST quilting friends thanks to the Sydney show. For me it's worth the effort and expense of taking time off work and staying in Sydney for at least 5 days so I can firstly have a little holiday and me-time, and secondly so I have the time to catch up with everyone at the show! This year was a little different - my lovely mum decided to fly down from Cairns and stay for a few days, which was just wonderful! She'd never been to a big quilt show before, and she also got to meet my friends (and she loved every single one of them). 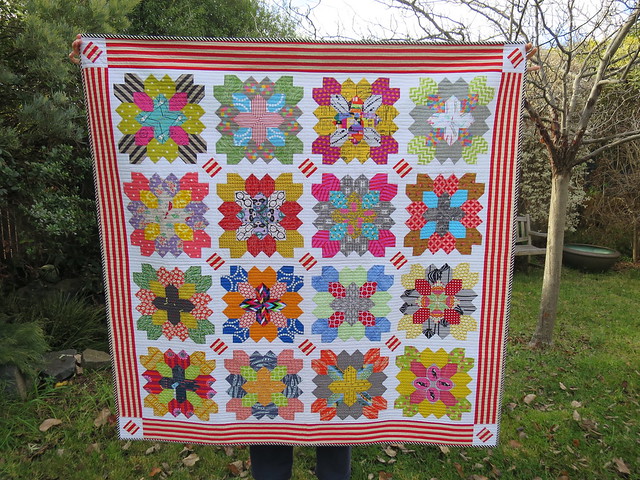 This year I decided to finally finish my Patchwork of the Crosses quilt and enter it. This pattern is a little different to the typical Lucy Boston version however - instead of one inch pieces, it used 1 1/2 inch pieces, and the blocks are also appliqued onto a background, not joined. I bought the pattern from the designer Cherry Pie Designs, at the last ever Darling Harbour show before they demolished the convention centre, and showed it at the first ever exhibition at the new Darling Harbour convention centre. 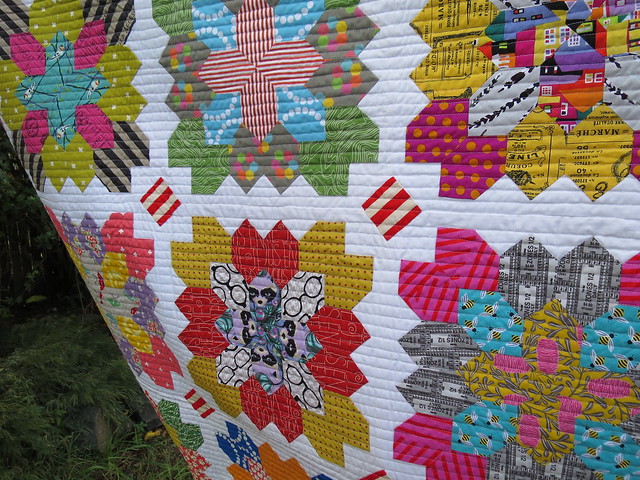 I was fairly pleased with how Lucy came together as a top. The striped border was thanks to my stubborness at being obnoxious about my fabric choices, my husband's insistence that a red and white circus stripe would be perfect, and the latest Tula Pink tent stripes hitting the quilt store at the exact same time. I honestly thought, on getting home, that I'd made a mistake getting red and cream, and not red and white, but it kinda turned out perfect! (Perfectly obnoxious, that is!) 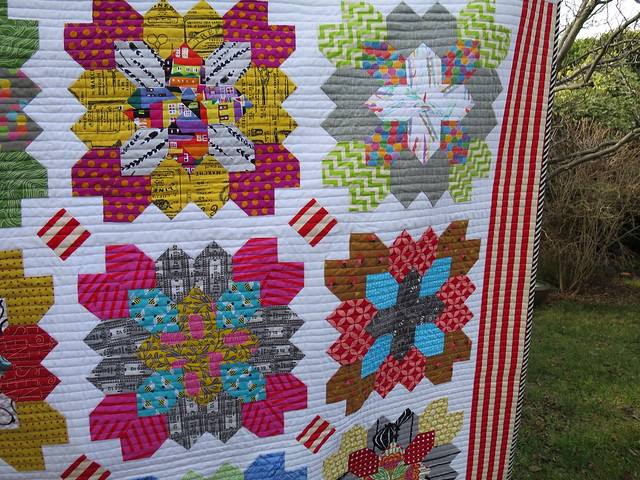 The quilting was when things went pear shaped. I started quilting a diagonal line from the top corner to the middle, turning 90 degrees towards the other corner. And then I repeated it every 3/8 inch. This started going a bit awry towards the middle of the section, but I persevered. By the time I got back from Fiji in early June, I finished off that first section and was faced with a massive bulge at the middle of the side border. So I spent two days unpicking it all - one quarter of the quilt, just gone. The bias blocks and the fact I hadn't cut out the fabric at the back of the applique had done me in, creating puckers and bulges, and if it hadn't been for mum coming all that way to see me and my quilt I would have withdrawn it from the show.

I ended up quilting horizontal straight lines 3/8 inch apart, and it turned out a lot better than I expected! It's not at all perfect, but I don't do perfect, and I was just happy it was done and not too much of an embarrassment to be hanging at Australia's biggest quilt show.

And then this happened. 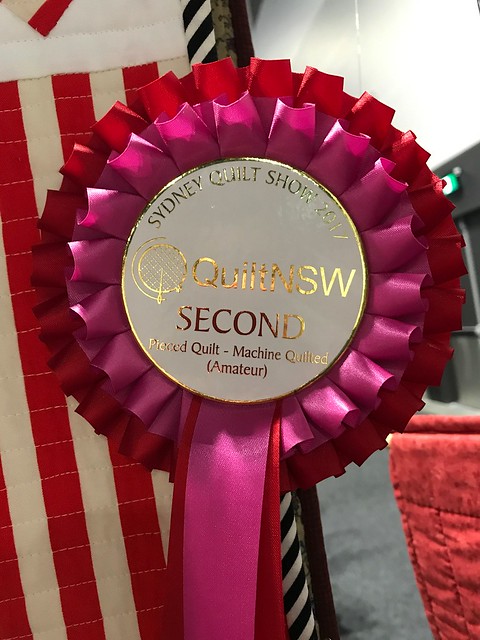 I will admit I did get a phone call from QuiltNSW the day before I left for Sydney. And I will admit I was really shocked at getting that phone call, especially given my category - Pieced Quilts, Amateur, predominantly machine quilted - seemed to have a really large number of entries (33) in it. Perhaps I'd won the meat tray*. Or they'd just made a massive mistake and had called the wrong Michelle. 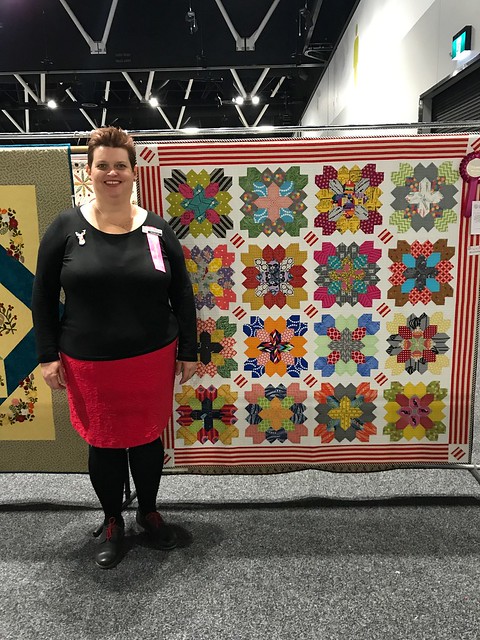 It was pretty sweet having mum there with me when they called my name out at the awards ceremony on day 1. She was so excited, as was I. I think I was just in shock that this had happened for the second year in a row, but the difference was that last year I knew my quilt was awesome. This year I was happy just to have entered it! 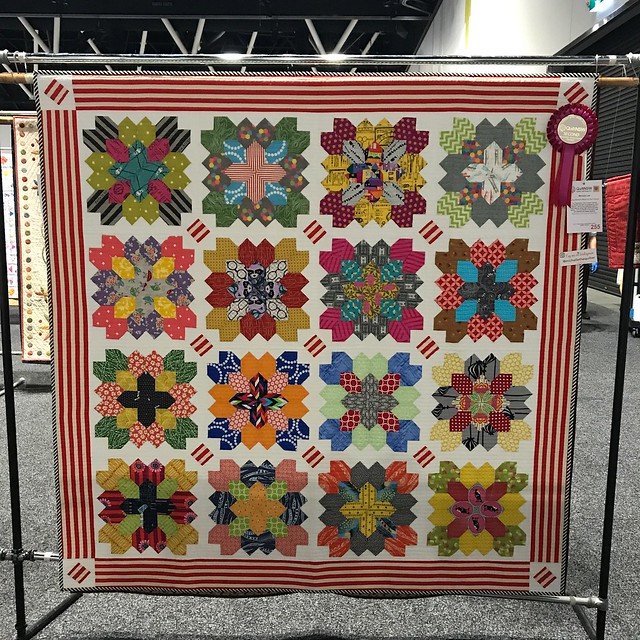 So yeah, there she is. Lucy Boston who went to the circus one day, and to Sydney the next, and earned a pink and red ribbon for her efforts.

While I'm talking about the Sydney Quilt Show (which was awesome by the way - so much colour! 410 amazing quilts!), I'll tell you more about the hoop display that QuiltNSW erects near the front entrance of the show. Last year was the first year they'd done it and it was so successful and got people talking about the different techniques and styles on show. I was asked to submit a hoop quilt of my own for this year's show, so I replicated my Across the Universe quilt but on a much smaller scale. 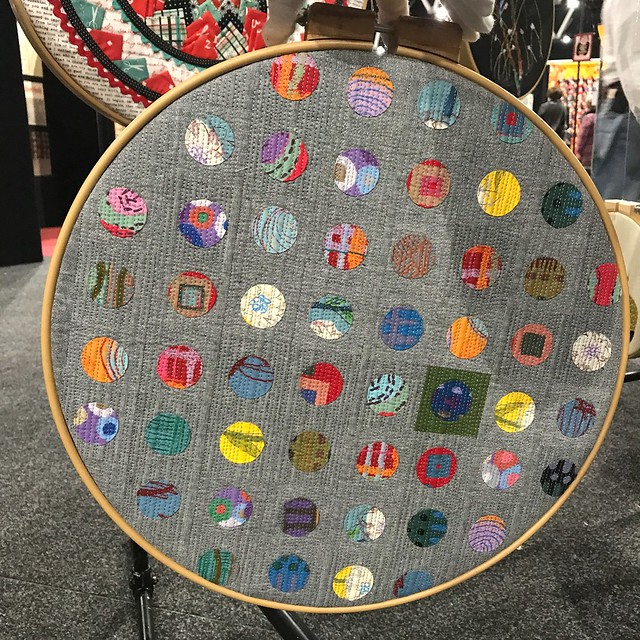 And here are the some of the other hoops - pretty chuffed that one of the hoops that my quilting bestie Rachaeldaisy made was hanging close by mine. I'm imagining they never stopped talking, much like the two of us :) 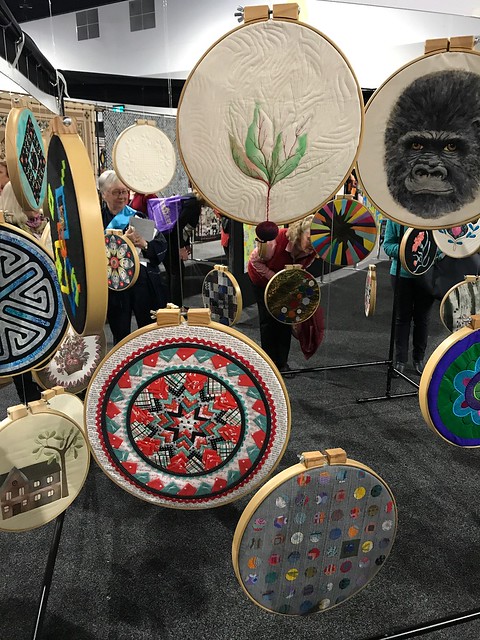 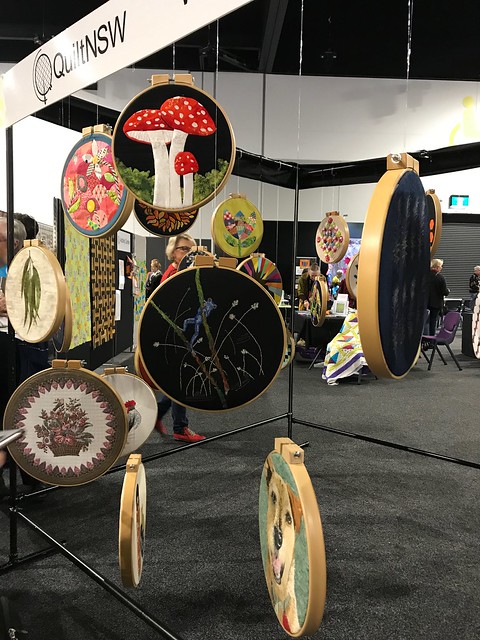 I think this post is long enough now, so I won't share with you the other quilts at the show. Hopefully soon though!

I haven't entered the Canberra Quilters Exhibition this year, for a number of reasons, so Lucy is now safely hanging on our living room wall at home, above my nana's table, and behind the orange sofa. She seems pretty happy, and she has increased the happiness in that room ten-fold. 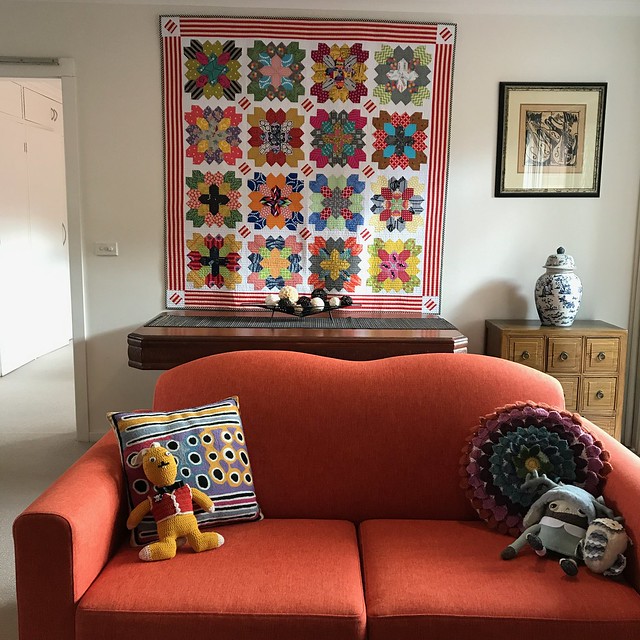 *there's no meat tray, but there should be.