Over the last few years quite a few independent pattern companies have popped up which has been fantastic - but very few of them cater for the curvier sewists amongst us. For so long now I have watched my regular-sized friends make the most amazing clothes that I would love to make myself, but don't possess the grading skills to size the pattern up. Also I'm stubborn - if I've just paid $22 for a pattern that doesn't come in my size, why the heck am I spending hours grading something?

Recently Colette Patterns put out a series of patterns which cater for most sizes. I was so elated that I purchased the Moneta pattern immediately. I still have to make one, but when I return from overseas that is on the list.

And then a couple of weeks ago, Katy and Laney, those very hip and happening young designers from Boston, put out a pattern that was not only gorgeous, but that would fit me! Angels sang! Jesus wept! All hail to the Geometry Top! 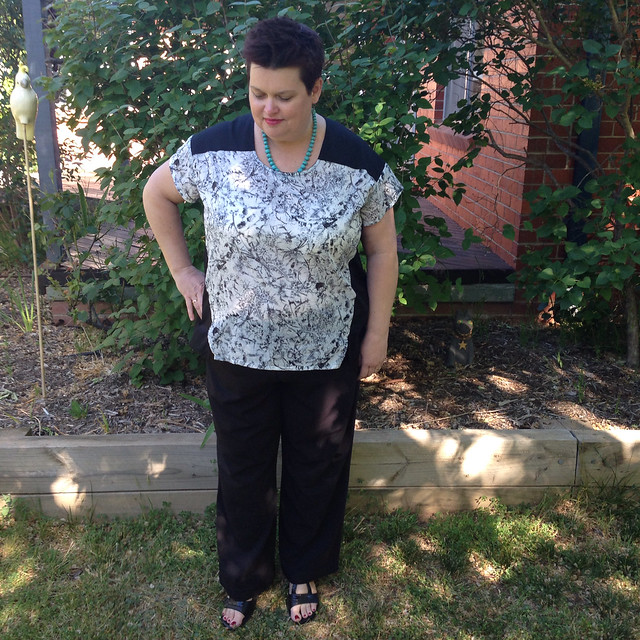 The moment I saw the pattern had been released, I bought it, printed it out, and had it taped up and cut out by the next evening. I actually finished this top off a week ago, but getting time around this place lately to photograph anything, let alone blog it, has been a tad difficult!

I cut out View B for my first Geometry Top (and I say first, because there will be more. Many, many more).

I had some gorgeous black, grey and white printed voile in the stash bought at Tessuti Fabrics in Surry Hills a couple of summers ago, and then last Saturday purchased some black voile from Addicted to Fabric here in Canberra to act as the back and sleeve contrast. My only problem with the black fabric was that in the rush to read the pattern and get the fabric cut, I told the cutter the wrong amount, and as a result I was short. So the bias strip for the neck had to be joined (no drama) and the sleeves had to be in the front fabric. Which I actually prefer anyway - it's such a nicer fabric that the plain black voile! 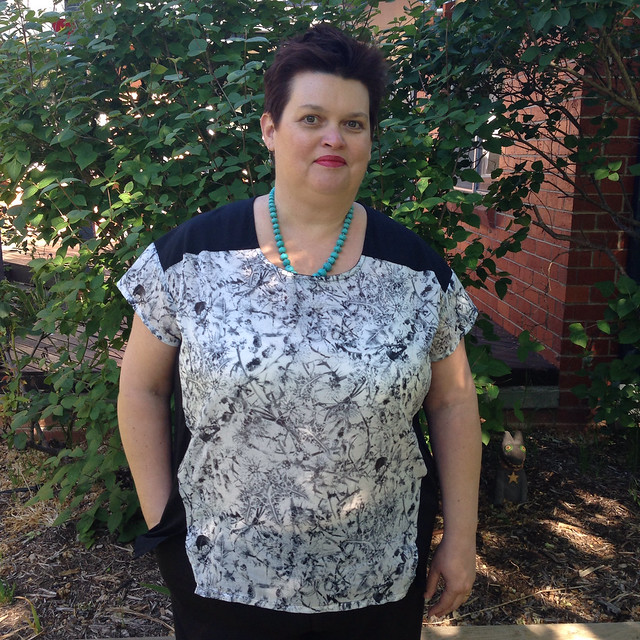 I cut a size 24 based on my bust size (and not my hip size) and thankfully Katy and Laney are not one of the companies that refuse to tell you what the finished sizes are so I totally knew how this top was going to turn out. (Yes, there are some indies who just won't tell you. And I've asked. It's like they're scared you're going to cut out the wrong size, or get confused, or perhaps they think their customers are stupid. Who knows.) But all respect to Katy and Laney, because otherwise I would have cut out a size bigger for my hips, and then my shoulders and boobs would have gone all cray-cray and fallen out of my top. Perhaps. 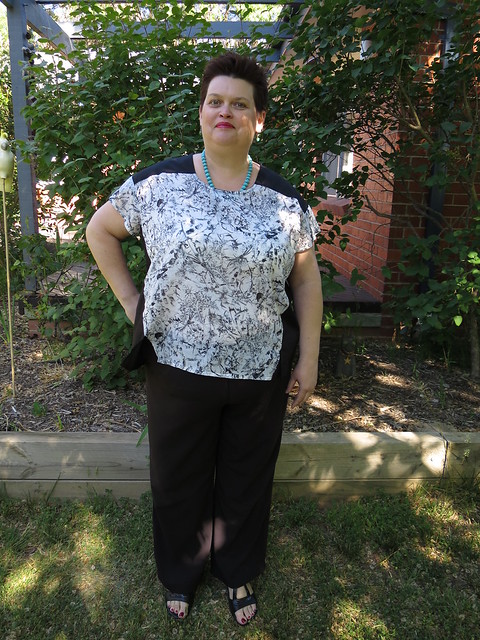 It was really windy when we took these photos, so you can't get to see very well how nicely the top drapes, or how those little slits at the front totally make the front piece look shorter. It's not. Total optical illusion. I was going to make a below-knee black pencil skirt to go with this top so I can wear it to work - that will happen. After I get back. (At the moment, I have next to me a list of what to pack, what to do ... and what to sew in three weeks when I return. Out of control with the listage.) 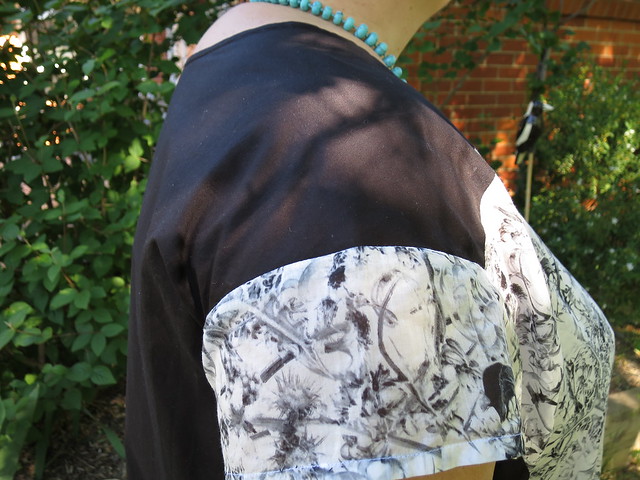 My one problem with the printed voile was that my sewing machine hated it. I changed needles. I changed threads. I changed tension. Nothing worked - everytime I hemmed those sleeves in black thread it puckered up and just looked plain ugly. I managed to hem the the bodice with black thread, and then gave it a really good steam to get the puckers out, but in the end I had to use white thread on the sleeves. They still puckered, but at least with the white thread the puckering isn't as obvious. 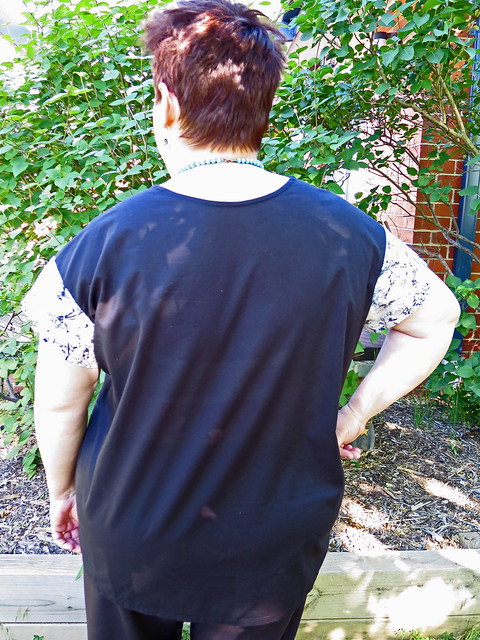 I had to Photoshop the crap out of this photo, as my camera suddenly decided it couldn't deal with the colour black. Jerk. Anyway, the shirt is actually a lot longer than I normally wear, so it bunches a little over my bum, but I like the length. It will be perfect for summer. But an issue has arisen - what colour bra to wear? The front is very sheer - it is so sheer I was worried people would see my 25 cm-long abdominal scar, but luckily you can't. So I wore a nude coloured bra rather than a black one, but you can see the pale back strap through the black voile. Normally I wouldn't mind about such things, but I might need to see how obvious a black bra is going to be from the front, or else live with the shading on the back. Wearing a cami in summer would be too unreasonable. I doubt anyone at work will be offended, or even notice.

I must admit to a little issue with the neck binding. I followed the (totally fantastic) instructions to a tee, but when sewing down the neck binding it didn't mention clipping notches into the neck curve, which is something I normally do. So I didn't. Even steam ironing it didn't get it to sit flat, but washing it and then ironing it again certainly did. So I probably won't clip the seams next time and take my chances with  a wash and an iron.

As I've already said, this won't be my last Geometry Top. In fact it is already on the "things to sew in three weeks" list. It will have a crazy red and cream striped silk voile, and a brown, white and red printed Japanese fabric than a friend bought me a metre of at Tomato about 8 years ago. It's been sitting in my stash ever since, because a metre of something so lush is kind of useless at my size. Until now.
Posted by Michelle at 6:30 AM