As mentioned in the last post, we headed to Sydney for a long weekend to avoid the Summernats. It was much quieter there. 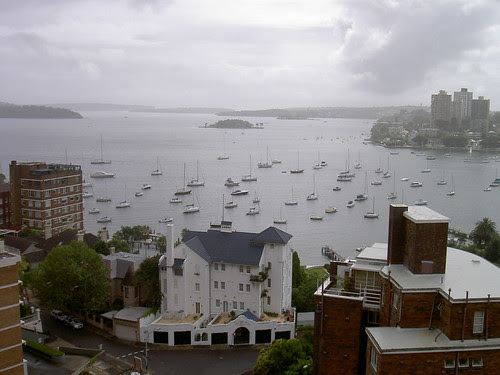 All in all, it was a very relaxing way to end my four week holiday. There was much sleeping, and shopping, and then a dinner and breakfast and countless gelatos (before and after dinner, of course) with Sydney friend Patricia.

I visited Tapestry Craft for the first time ever, mainly so I could see for myself their reportedly high prices for stuff which for us in Canberra is comparatively Dirt Cheap. I dared not touch the $10.40 ball on Patonyle, in case I be asked to buy it. I fell in love with the Eki Riva baby alpaca but left it there. A couple of skeins of Naturally Merino/Angora did follow me home though, but only because I've not seen it anywhere else. Perhaps because I wasn't looking for it. It is very lovely though.

A couple of craft/crochet books in Kinokuniya, three blouses in the Myer sale, two tees for Mr QM a leather pocket diary and a pair of Krosno glasses later, and I was broke and in desperate need of a foot massage. I had indeed shopped until I dropped.

Our weekend away ended a wonderful lunch with Mr QM's brother and sister-in-law in Berowra, and then we were on our way back to the polluted environment of Upper Downer, all courtesy of burning rubber and too much testosterone. Plus it's super hot.

Work tomorrow. I wonder if there's time for a swim first.